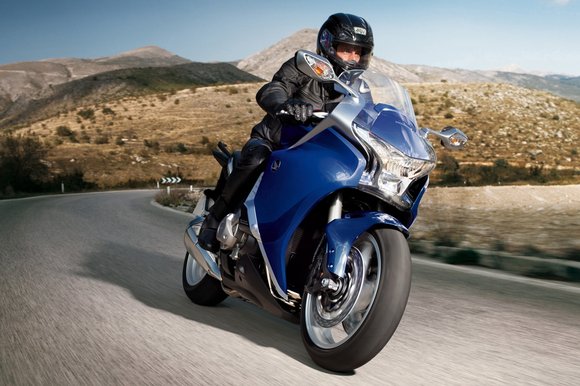 A Buddhist monk once told me that when you expect nothing, everything is a gift. Honda’s new sports tourer gives a glimpse of nirvana.

A Buddhist monk in Japan once told me that when you expect nothing, everything is a gift. That must have made him popular with his mates when it was their round, but at least it proves he never worked for Honda.

You see, for two years before the VFR1200F came out in 2009, the world’s motorcycling journalists were driven into a frenzy of expectation by a drip-feed of increasingly hyperbolic leaks from Honda, hinting that this would be the best sports tourer ever: lighter than a sports bike, more comfortable than a cruiser and with more gizmos than the space shuttle.

And it wasn’t. It was a decent enough machine, but it was heavy, unwieldy, thirsty and lacking in electronic aids apart from antilock braking. The journalists in question were so disappointed that they slated it from here to next Sunday and back again.

Okay, it deserved criticism, but not to that degree. It was a competent bike with a high standard of finish, but Honda was so shocked, it went into hiding. Apart from bringing out an auto dual-clutch version in 2010, it hasn’t updated the bike until now.

What has Honda done to improve it? For a start, the seat is softer and more sculpted — important for long distances — and the confusing dash has been redesigned, with a central analogue tacho flanked by two digital wings.

Unfortunately, the horn button is still in a weird position above the indicator switch, which left me honking once to turn left and twice for right for the first 10 minutes.

One of the most strident criticisms of the original was that it was supposed to be a tourer, yet under hard use the range could drop to 100 miles or less. The fuel tank has therefore been increased from 18.5 litres to 19 litres and the V4 engine has been remapped for more fuel efficiency and low-end torque.

It works, with creamy power on tap all the way from below 2000rpm to the red line at 10,000rpm, accompanied by a deliciously visceral snarl rising to a bellowing howl. As aural delights go, they don’t get much better.

Better still, it comes with switchable traction control to tame its 170bhp, since on the launch of the original, I lost the back end several times accelerating hard on wet Spanish roads.

Handling remains unchanged: a bit vague at low speeds and needing conscious input on the open road. It’s neutral enough, but not as good as the same company’s Crosstourer or the world-beating Triumph Tiger 800.

You can choose between a manual six-speed gearbox or, for an extra £650, the second generation of Honda’s dual-clutch transmission, which the company claims “intelligently optimises shift points relative to the rider’s throttle inputs for more user-friendly operation”.

Unlike last time, it’s telling the truth: the dual clutch is a clever system that I guarantee changes gear better than you can. The verdict? Not perfect, but a lot better than the first attempt.