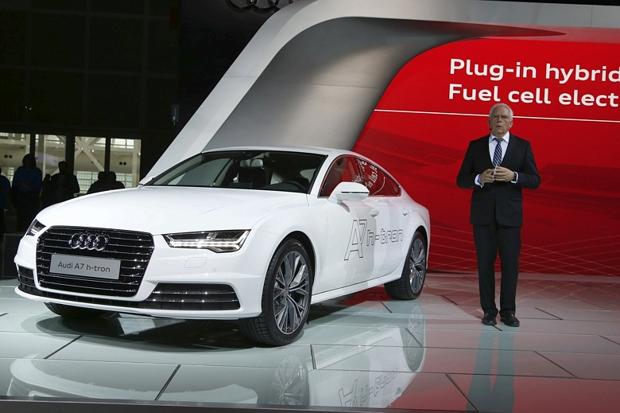 Hydrogen is everywhere, so the chemists say and, at the Los Angeles Auto Show, cars that silently run on the fuel of the future are making sure they get heard among the high-performance speedsters and bulky 4x4s beloved of West Coast America.

After the big splash made in the run-up to the show by Toyota with the launch of the world’s first showroom-ready hydrogen fuel-cell car, the Mirai, other big manufacturers are making sure that the drive to the ultimate alternatively fuelled vehicle is not a one-horse race.

Audi, the luxury end of the Volkswagen group, unveiled the A7 Sportback h-tron Quattro, a hydrogen fuel-cell version of its e-tron plug-in hybrid electric car.

While the A7 h-tron Quattro is far from the finished article — it remains a concept car— Rupert Stadler, Audi’s chairman, said that work is far enough advanced to claim that, apart from producing zero carbon emissions, it can get up to 60mph in 7.8 seconds.

That makes it nearly a couple of seconds quicker than the Toyota Mirai, suggesting that Audi believes that in the world of guilt-free motoring, people will still want something getting on for high performance.

Honda has been racing neck and neck with Toyota to gets its FCV — fuel-cell vehicle — on the road. The unveiling of a Honda hydrogen production car is, however, lagging Toyota. While the Mirai goes on sale in Japan next month and in the United States and the UK this time next year, Honda is now saying it won’t be ready to launch until next spring.

Other big manufactures moving on with hydrogen — the zero emission fuel that enables cars to go at least three times as far as the best lithium-ion battery-powered electric cars on the market — include Mercedes-Benz, which is working on the unveiling of a futuristic G-code prototype.

California is the market at which all the manufacturers are concentrating their focus and why the Los Angeles Auto Show is Hydrogen Central.

“California has been the environmental leader for the last 47 years. With our zero-emission mandate, we are developing policies that limit emissions from cars and trucks but do it in a way that promotes innovation.

“We had found, however, that we could not resolve the chicken-and-egg question.”

That is the conundrum of getting carmakers to manufacture hydrogen cars when there is no fuelling infrastructure.

It is being resolved by the state of California throwing $200 million at setting up a 100-strong filling station network to ensure that the state hits its target of 1.5 million zero-emission vehicles on the state roads next year — equivalent to about one-in-ten of the number of cars in California

“Government funding is important but we have to work alongside the manufacturers and the industrial gas suppliers,” Dr Ayala said. “We will do whatever it takes to hit our targets.

“But to succeed in California, [hydrogen carmakers and infrastructure suppliers] need to succeed everywhere else as that way we all benefit from the economies of scale.”