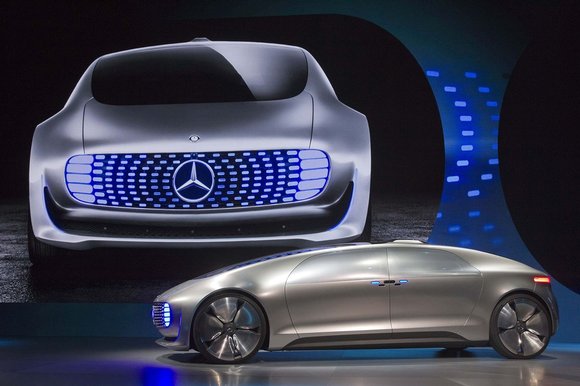 This morning, the men, and the few women, who run the world’s biggest car makers will start to show off their hot new metal in bone-numbingly cold Detroit. But they will be too late. The cars of the future were cruising the Las Vegas strip last week in warm desert sunshine.

Self-driving cars from Mercedes- Benz, Audi and BMW, which use cameras, radar, lasers and GPS-mapping to find their way, were the new stars of Sin City.

The International Consumer Electronics Show (CES) shone the spotlight on BMW’s electric i3, which can find a parking space in a multistorey garage, park, turn off its engine, and lock itself, and then drive back to its owner at the car park entrance when he or she returns.

The keynote addresses at CES were given by Dieter Zetsche, chairman of Mercedes, and Mark Fields, chief executive of Ford, rather than the usual head honchos at Sony or LG who have vast new smart televisions to flog.

Raj Nair, Ford’s head of product development, who spends more than $5bn (£3.3bn) a year on technical research, told The Sunday Times: “CES is at the same level as Detroit.” That’s remarkable when you consider that Ford, which is itself based in Detroit, first came to CES just eight years ago, while the auto show has been going for more than a century.

Ford was the first car manufacturer to show off its latest technology at CES. So many have followed that one corner of the vast Las Vegas Convention Centre is now nicknamed Motor City.

The industry is shifting from the Midwest to the Wild West to follow its customers. Cars used to sell on performance, design and price. The only electrical bit that buyers cared about was the sound system.

Now technology is the top-selling feature for almost 50% of buyers, according to a study by the consultancy Accenture. Another survey by McKinsey found that 40% of consumers in the key Chinese market would change their brand if another offered better digital connectivity.

It is the biggest shift anyone in the car industry can remember. Christoph Grote, head of research and new technology at BMW and the man behind the self-driving i3, said: “We have had changes of powertrain, with hybrid and electric cars, but that was not as significant as the convergence of consumer technology and the car that we are seeing now.

“Manufacturers and customers are navigating a totally new landscape. Never has the pace and depth of change been so fast or so deep.”

The stakes are high. A recent report by GSMA, the mobile phone operators’ trade body, predicts that revenues from in-vehicle services, hardware and connectivity will treble over the next five years to reach $39bn in America alone. Car firms also see technology as an important new tool to attract young customers, many of whom are less interested in cars than previous generations, put off by the high costs and congestion.

The car giants are not just heading west on a customer offensive. They are playing defence, too. Bosses are worried that in the emerging “internet of things” — a world of connected devices at home and on the road, all controlled through smartphone apps — tech firms will move into the driving seat, as they have already done in the music and book industries.

Apple and Samsung are already trying to grab the steering wheel by extending their smartphone operating systems to the car. Apple has launched CarPlay, a vehicle infotainment system that uses Siri voice control. Google has Android Auto.

Elon Musk, co-founder of PayPal, has gone one step further, establishing the Tesla electric car brand in Silicon Valley. Google is also developing a driverless car that has already taken to the road in California.

If car makers lose control of the systems that make their products fun, profit margins will be squeezed and they will be relegated to mere producers of “tin cans”. Sergio Marchionne, boss of Fiat Chrysler, says cars must not become “a venue to host other people’s parties”.

To safeguard their position, some manufacturers are investing directly in tech companies. BMW has backed JustPark, which develops self-parking technology.

The world has never been kind to flying-car dreamers and it is tempting to dismiss as mere sci-fi fantasy last week’s self-driving stunts and Zetsche’s promise that one day soon our cars will become “private mobile living spaces”, where we read the newspaper, chat or work as we are silently wafted along the motorway.

“It’s not,” says Wolfgang Ziebart, director of group engineering at Jaguar Land Rover, who worked with Apple in a previous life. “It will happen. Yes. These technologies are moving quickly. Within 10 years, we will have cars that 80%-90% can drive autonomously on motorways and less demanding environments.”

By 2020, almost every big car maker expects to offer some form of hands-off-the-wheel, feet-off-the-pedals driving, where you can sit back and let the car take control. Mercedes already does with its spiffy S-Class and GM plans to launch a Cadillac with its Super Cruise system next year.

But before we get there, the auto bosses have difficult decisions to make. First, they have to convince consumers that hi-tech cars are a good thing.

Some techno-wizardry will be an easy sell. Nobody likes parking, so a car that can not only find a space and park but can drive back to its owner when he or she returns is sure to be popular.

Self-drive in slow-moving traffic will reduce stress. Cars that communicate their position and speed to each other as they drive will enable traffic authorities to regulate speed limits and change traffic lights to prevent jams.

Crashing is bad for your health. All the new cars in Vegas last week offered self-braking and smart steering to avoid accidents, as well as systems to monitor drivers’ awareness to prevent them falling asleep. So far, so safe.

But it will be harder to convince drivers to share the huge amount of data their smart car will generate. Smart cars will be always on. They will know everywhere we go and when and, since they will be linked to our online calendars, they will also know why we are going where we are going and what we are going to do when we get there.

Creepy? Yes, says Martin Winterkorn, chairman of Volkswagen. “I clearly say yes to big data, yes to greater security, and yes to convenience. But no to paternalism and Big Brother. The car must not become a data monster.”

Manufacturers are working to convince us we are not being tracked. “Privacy is a fundamental value,” says Grote. “BMW drivers own their own data and it is aggregated, anonymised and regularly permanently deleted. We can’t track you or your car and we will never give the data to other parties.”

But could even anonymised, aggregated data be used to market products to us and send us advertisements, as Google does now? It could. That’s one reason BMW has refused to sign up to Android Auto.

And what about the cyber threat? Could hackers take control of a car while it is being driven? As manufacturers begin to send software updates,to new models over the mobile phone network, as phone, tablet and computer makers do, vehicles are becoming vulnerable.

Chinese students recently hacked a Tesla Model S and opened its doors while it was on the road. Last year US researchers demonstrated a cyberattack on Toyota Prius and Ford Escape vehicles that could affect steering and braking.

Nair says: “We have to be very careful about over-the-air updates. We need really robust systems to prevent wireless hacking.”

There are legal and ethical speed bumps ahead, too. Regulators have banned autonomous driving in many countries. No one has yet worked out how to insure self-driving cars and who is to blame if they cause a crash — the owner or the manufacturer?

Most important of all is the question of brand. Car buyers are more brand aware than any other kind of consumer. Some marques sell because they are sporty, notably BMW and Jaguar.

Grote, who launched the self-parking i3 in the SLS hotel in Vegas, which has mirrors on the ceilings over the beds, insists BMWs will still be sexy. “We take great care to connect you to the wheels and the road. In heavy traffic, you might use automated drive. But when the sun is shining and the road is winding, a BMW is pure driving pleasure. You want to grab the wheel.”