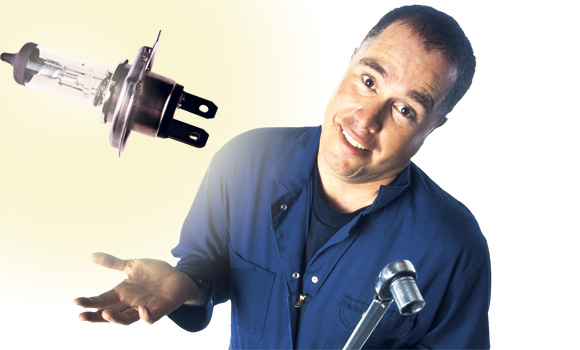 Modern cars are so complex that replacing a bulb can mean removing a wheel. Are high costs inevitable or are drivers being ripped off?

How many mechanics does it take to change a £3.99 lightbulb? On some cars the answer is three. And it could cost £100. That’s not a joke. As British motorists start feeling the pinch from higher fuel prices, parking charges and road tax, the cost of car repairs has ­ballooned to levels that would have been unthinkable even five years ago.

According to the AA, the ­average annual cost of repairs on a standard car over the first three years of ownership has risen from £738 in 2005 to £864 today — a 15% increase. That figure is set to rise even further from January with the planned rise in Vat to 20%.

Car manufacturers put the spiralling cost down to a combination of ever more complex parts for modern cars and a corresponding rise in labour costs, because in many cases it takes far longer to fit new parts. However, the cost of labour has also risen to unprecedented levels. In 2004 the average cost of an hour’s labour was £56.72p. ­Today it is £75.85p — a rise of more than a third.

Figures from Warranty Direct, which pays for thousands of repairs each year for customers of its after-­market warranties, show that some ­garages are now charging £190 an hour. Over a typical 39-hour week that equates to a salary of more than £350,000, including time off. Clearly, one mechanic would not be paid all that, but the fact that a garage commands the same hourly rate as a Harley Street doctor or City lawyer has raised questions in the industry.

According to Edmund King, president of the AA, such costs are not sustainable. “Where cars have been expensive to repair, manufacturers might realise that demand for those vehicles will drop off unless they change things,” he says. “The costs of repair are something that consumers should be aware of when they are buying a car.”

Owning a car has always been an expensive business, but the recent increases for even minor parts and repairs has led to surreal exchanges between drivers and garages. When a headlight on the 2007 Renault Scénic owned by Andrew Parr, 66, blew as he parked the car in his garage, the retired chartered engineer from Sheerness in Kent assumed replacing it would be simple.

Renault says a main dealer could have done the job in about 15 minutes and would have charged £8.99 for the bulb. The cost of labour varies across Britain, but Renault said it would be an average of £35 plus Vat.

Another Sunday Times reader, who drives a Mercedes A-class, got in touch after being charged £116 in parts and ­labour by a Mercedes dealer to replace a xenon headlamp bulb. It involved an hour’s work because, in A-classes fitted with xenon lights, the bumper and wheel need to be removed. Mercedes has since refunded the £116 as a goodwill gesture.

So are motorists being taken to the cleaners or is this simply the price to pay for safer, more eco-friendly and more comfortable cars?

Renault says the reason the cost of changing the headlight on the old-style Scénic — as driven by Parr — is so high is that access to the bulbs is compromised by the design, which boosts the car’s crash performance.

Costs also increase when small ­broken components cannot be separated from larger units: owners have found that entire turbo units need replacing when £400-£500 electronic control modules fail. Because the modules are attached to the rest of the turbo, it all has to be removed. On a Land Rover Discovery 2.7 TDI, for example, it costs £1,247.90, together with £518.50 for more than six hours’ labour, and £309.12 Vat, making a total of £2,075.52.

“Simple tasks can take much more time than motorists might expect,” says Duncan McClure-Fisher, managing director of Warranty Direct. “And dealers are often overcautious in ­suggesting the replacement of whole units rather than the individual failed part. This has the knock-on effect of causing an expensive repair when often the component that has failed is relatively cheap.”

Some experts claim that the rise in costs is not an unavoidable consequence of complex cars, however. They point out that as cars have ­become more reliable, needing fewer repairs, so dealers have inflated the rates they charge in order to cover their overheads.

“Modern cars need less and less routine maintenance as time goes by,” says Matthew Minter, the editorial director of Haynes manuals. “The dealer and service network, on the other hand, still has its fixed overheads to cover, so the hourly service rate goes up and up.”

Minter points to the fact that independent garages that have no affiliation to the car manufacturer usually charge far less for the same amount of work. The difference between dealer rates and those of non-dealers can be astonishing. According to Warranty Direct, which surveyed more than 5,000 dealers and independent garages across the country, the difference can run into hundreds of pounds for long jobs. For example, in Derbyshire the average hourly rate at a franchised dealer was £96.32 last year, while independents charged on average £47.13 — a difference of 104%. In Lincolnshire franchised dealers charged £88.16 compared with the non-franchised rate of £43.89 (101% more). And in Norfolk dealers charged £91.97 an hour, compared with £46.89 (96% more). Overall it found that official dealers charged on average 60% more per hour than independents.

Even within the dealer network labour rates can vary wildly. “Some dealers within the M25 charge beyond £170 in labour rates, which is absolutely extortionate, whereas the same manufacturer is charging £90-£100 in Leeds for the same work,” says Lawrence Whittaker, managing director of Warrantywise, another insurer. “I think it’s unfair that people are penalised for living in affluent areas.”

So what can motorists do to keep their costs down? The obvious answer is to find an independent garage that will do a job for a fraction of the cost of a main dealer. In the past, motorists were restricted in doing this because some manufacturers insisted that, for the car’s warranty to remain valid, it must be serviced by one of its dealers. New European commission competition rules have put an end to this. As of last June, a car manufacturer has not been allowed to penalise a driver for using a garage outside its dealer network. This means that most drivers should be able to find that there is an alternative to a franchised dealer and take advantage of reduced rates.

That is not the end of the story, though, according to Paul Everitt, chief executive of the Society of Motor Manufacturers and Traders. “There is a difference between price and value,” he says. “There are three key areas in terms of value offered by franchises. The first is technical expertise; the second is that the parts being used are manufacturer approved; and the third is the customer care and reassurance for the consumer.”

That may be so for more technical jobs, but when it comes to simple pieces of car maintenance — well, maybe the days of the £100 lightbulb are about to be extinguished.